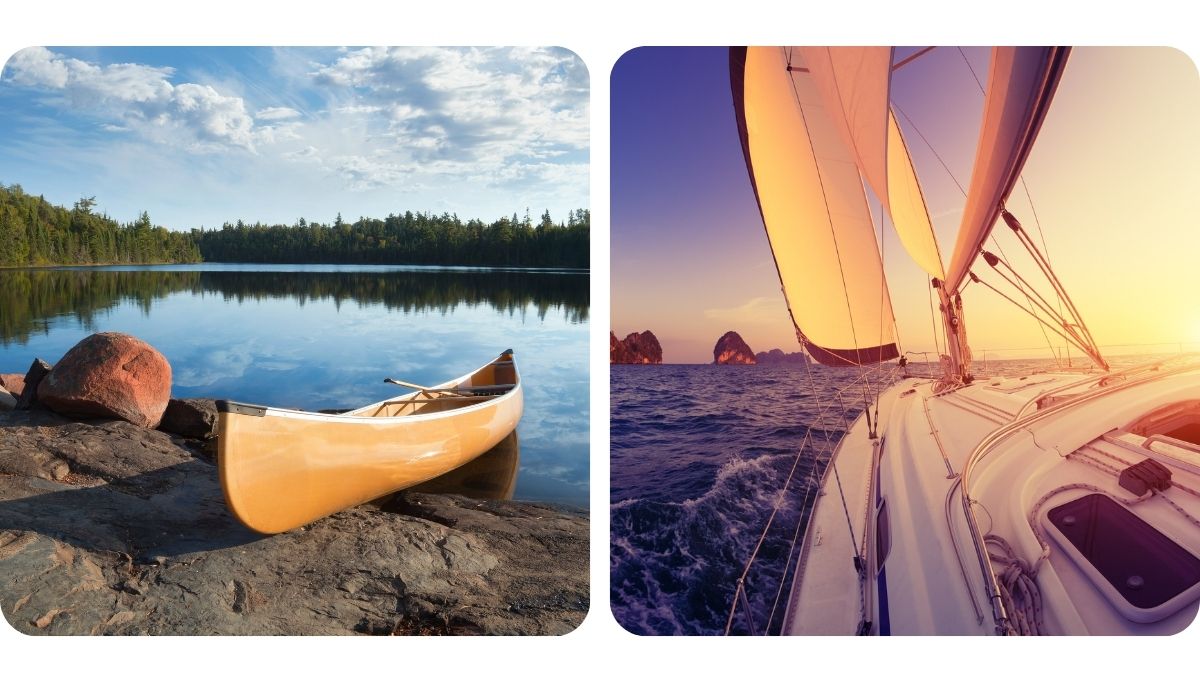 Since they are very similar, it is pretty easy to confuse canoes and boats. But boats and canoes are not the same – one is a hyponym of the other – so using them interchangeably does not tell an accurate tale.

So, what is the difference between a boat and a canoe?

Boats are a group of watercraft, and of course, they share some similarities in their structure with canoes.

Canoes, on the other hand, are a type of boat. Therefore, canoes are a subset of boats.

In the rest of this article, we compare canoes vs. boats. We talk about their types/categories, structure, how they are powered, and much more.

What Is the Difference Between a Boat and a Canoe?

Beyond the above, we can further discuss the difference between boats and canoes under the following headings:

There are many types of boats, and each one comes in different styles, sizes, and shapes. In other words, a boat’s structure can take one of many various forms, including that of a canoe.

Canoes, on the other hand, are typically narrow, long, and they have open tops.

Depending on the type, boats can be used for transporting goods, traveling, fishing, military operations, sports, rescue operations, and sports.

Canoes, on the other hand, are primarily used for sports and recreation.

How They Are Powered

Boats can be powered or propelled in three main ways: with a sail, with a motor, or with paddles through human effort.

Canoes, on the other hand, are usually propelled or powered by humans using paddles. In many cases, canoes are typically paddled by two people. But some canoe designs require just one paddler. Canoe paddlers either kneel in the hull or sit on the hull support.

The drafts of many boats are designed to sail on shallow waters; this makes them pretty easy to use. You can learn how to use them in a short period, and you can even modify them without fuss.

Things are different with canoes. In many cases, the drafts of canoes are not shallow. Their V-shaped bottoms make them cut deeper into the water, and this makes them harder to turn.

Also, the early stages of learning to use a canoe are relatively complicated compared to some other types of boats.

While most canoes are deep-drafted, there are flat-bottomed canoes, which are shallow-drafted. These types of canoes are typically used for recreational purposes and are less complicated to learn.

There are over 50 types of boats, and each one of them falls into one of 3 categories:

Canoes fall under the man-propelled category of boats.

Some of the types of boats include:

Canoes, on the other hand, can be categorized based on their designs and construction materials. They may also be classified based on the number of riders they can hold and what they are used for.

Based on their design, canoes can be classified into two groups: traditional design and modern design.

Based on their material, canoes can be:

Based on the number of riders, canoes can be:

Based on their application, canoes can be:

Similarities Between Boats and Canoes

Similarities and Differences Between Canoes and Some Other Types of Boats

While kayaks and canoes have similar forms, the paddler experience offered by each boat type is different.

Besides the above, canoes are propelled using paddlers. However, Adirondack guideboats are powered with pinned oars.

Adirondack guideboats have broader amidships and higher bows. So, they are relatively more stable than canoes.

The seats in Adirondack guideboats are arranged in such a way that the passenger faces the rower. But in canoes, everyone on board faces the same direction.

Compared to canoes, Adirondack guideboats are not markedly affected by current or wind.

The design of sit-on-tops is more like that of kayaks. However, they have open cockpits like those of canoes.

Sit-on-tops typically have scupper holes, which allow water to drain through them readily. Canoes, on the other hand, usually have no scupper holes.

The primary difference between rowboats and canoes is how they are propelled. While canoes are moved using paddles, rowboats are propelled with oars.

While canoes can be propelled with a single paddle, rowboats need a pair of oars pinned to the watercraft in oarlocks.

Canoes have a symmetrical design: both ends are pointed. Rowboats, on the other hand, have one pointed end and a square stern.

With canoes, the paddler faces the direction in which they are traveling. But with rowboats, the rowers back is toward their travel direction.

While canoes are powered with paddles, jet boats are propelled by a jet of water. Jet boats come with a propulsion system that ejects water from behind the craft at high speeds. The ejection of water from said propulsion system drives the forward momentum of the vessel.

Compared to canoes, jet boats are easier to control. They also come with relatively more sitting areas than canoes.

While canoes are pointed at both ends, jet boats typically have a square stern and a pointed bow.

Game boats are made with fiberglass. So, they share the same material with fiberglass canoes. But that is just about the main similarity between the boat types.

Game boats are used to pursue game fish. Hence, the name. They can achieve way higher speeds than canoes.

The primary difference between canoes and houseboats is accommodation. While houseboats come with shelter and various living facilities, canoes are relatively bare.

Since houseboats come with a form of housing, they are suited for getaways, recreational purposes, and holidays on the water. But canoes, on the other hand, cannot offer the same ambiance.

Tugboats are large-sized boats, and they are primarily used in docking ships in the port. Tugboats control the movement of vessels by pulling or pushing, hence, the name tug. They come with engines that have average powers of around 700-3400 hp.

Canoes are relatively smaller than tugboats. But they cannot be used in berthing or mooring ships because they are propelled with paddles. Paddling cannot generate enough force to maneuver such large vessels.

Advantages of a Canoe

Disadvantages of a Canoe

Canoes are a subgroup of boats. While boats can be powered by sails, motors, and man, canoes are only powered by man (through paddling).

Across the various examples of boats, you will come across different shapes, sizes, and designs that are markedly different. But with canoes, the structure is typically narrow, long, and open-top.

All in all, calling a canoe a boat is correct but non-specific. At the same time, labeling just any boat a canoe would be inaccurate.

*This post may have affiliate links, which means I may receive commissions if you choose to purchase through links I provide (at no extra cost to you). As an Amazon Associate I earn from qualifying purchases. Please read my disclaimer for additional details.. Everyone loves the beach and oceans. If you have dogs, you should…

*This post may have affiliate links, which means I may receive commissions if you choose to purchase through links I provide (at no extra cost to you). As an Amazon Associate I earn from qualifying purchases. Please read my disclaimer for additional details.. No one goes sailing on the water looking to get in a…

*This post may have affiliate links, which means I may receive commissions if you choose to purchase through links I provide (at no extra cost to you). As an Amazon Associate I earn from qualifying purchases. Please read my disclaimer for additional details.. Do you love fishing? Fishing engages the family. While some people fish…

*This post may have affiliate links, which means I may receive commissions if you choose to purchase through links I provide (at no extra cost to you). As an Amazon Associate I earn from qualifying purchases. Please read my disclaimer for additional details.. Do you love seafaring? Do you have a dog? It will be…

*This post may have affiliate links, which means I may receive commissions if you choose to purchase through links I provide (at no extra cost to you). As an Amazon Associate I earn from qualifying purchases. Please read my disclaimer for additional details.. Canoeing was once a main source of transportation on rivers and today…

*This post may have affiliate links, which means I may receive commissions if you choose to purchase through links I provide (at no extra cost to you). As an Amazon Associate I earn from qualifying purchases. Please read my disclaimer for additional details.. Do you have a beach house? That’s awesome. You should give your…

Paddle Zen is owned and operated by Paddle Zen, an California limited liability company. Paddle Zen is a participant in the Amazon Services LLC Associates Program, an affiliate advertising program designed to provide a means for sites to earn advertising fees by advertising and linking to Amazon.com. Paddle Zen also participates in affiliate programs with Awin, Clickbank, CJ, ShareASale, and other sites. Paddle Zen is compensated for referring traffic and business to these companies. There is never any additional cost to you.